You are here: Home / Latin America / Argentina / A Not So Typical Monday Night In Buenos Aires

My classes on tuesday do not begin until 1, giving me tons of time to enjoy Monday night. But this is not the same for all of my other roommates. But I still managed to convince them to come out.

We left the house at around 8PM walking with no direction and no plans in mind. The first stop after an hour of walking was to buy the cheapest wine available, 2 peso boxed wine (less than $1).

A little while later this monday night was not so boring anymore.

We somehow ended up at a house party where we knew nobody. But halfway during the party we lost a team member.

The two remaining, myself and Alex, finally took a cab home. A block away we saw this creepy stuffed animal.

And then we found the missing team member. 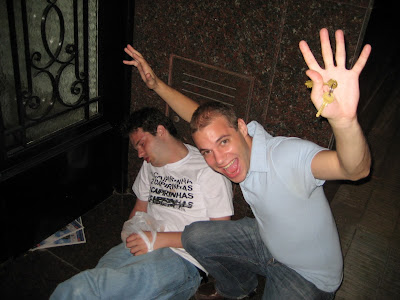