You are here: Home / All Countries / A Tourist Guide to Dresden

Often referred to as ‘Florence on the Elbe’, the German city of Dresden has had a bittersweet history. Its renaissance beauty was razed to the ground during the Allied bombing of the city in 1945, about which the American author Kurt Vonnegut wrote his famous novel, Slaughter House Five. But despite its turbulent past, modern Dresden has been restored to its former glory and also holds some breathtaking examples of innovative new architecture. There are plenty of other attractions for visitors to discover. Here’s a quick guide to Germany’s most easterly city. 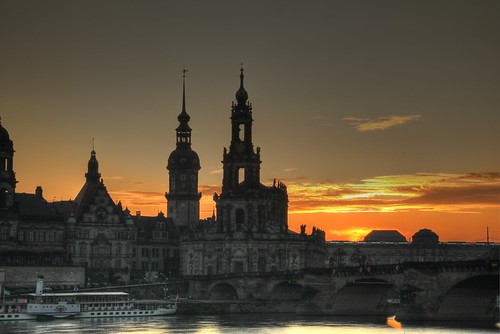 Home to medieval princes, kings and duke, by the 19th century Dresden had become a centre of industry. It made cars, medical equipment, cigarettes and cameras, as well as the famous Dresden china.

In February 1945, three days of Allied air raids and widespread fire-bombing destroyed most of the city. However, with the completion of renovation works to the Frauenkirche (Church of our Lady) in 2005, Dresden has recovered its status as a cultural and economic centre.

Dresden’s most impressive street is Bruhl’s Terrace, nicknamed ‘the balcony of Europe’. It sits on the banks of the Elbe and is full of historic buildings such as the Royal Art Academy and the Albertinum Museum.

Shops in Dresden usually open from 10am to 8pm. The main shopping street is Prager Strasse, near Dresden Central Station. On Saturday mornings a flea market is held near the Elbe, and every Friday there’s a farmers’ market on Lingner-Allee.

Look out for Dresden china in antique shops. The back of the plate or cup will have a picture of a crown, with the letter ‘D’, or the word ‘Dresden’.

You should have no trouble finding a bed and breakfast in Dresden and there are plenty of hotels to choose from. The Old Town may be the best area to stay, as it’s close to the shops and the river and well worth seeing in its own right.

If you’d prefer to live as a local, visit a booking website  to find apartments to rent. Local hosts can give you tips on the best restaurants and other hidden attractions.

In late spring the Dresden Music Festival features around 80 classical performances and attracts 100,000 people a year. If you visit in another season, there may still be something on at the famous Semper Opera.

During the Filmfest Dresden, also held in spring, short films are screened outdoors on the banks of the Elbe. The best movies win Golden Horsemen trophies, an award named after the statue of King Augustus the Strong at the city’s New Town Market.

The Dresden Card offers big savings on travel and tourist attractions. You can buy individual or family tickets lasting one, two or five days, and costing between 10 and 98 euros.

Regular steamboat tours run from Dresden along the river Elbe passing the famous Elbe Palaces and Pillnitz Castle, which is open to the public and includes an arts and crafts museum.

On a longer cruise you may pass the Konigstein Fortress, the Elbe Sandstone Mountains and the Blue Wonder suspension bridge.

The Kunsthalle contains a fine collection of art, but is better known for its oddly shaped glass dome, which has earned it the nickname ‘lemon squeezer’.

The Military History Museum doesn’t just commemorate war, but rather seeks to answer the philosophical questions – why do we go to war, and can it ever be justified?

The German Hygiene Museum is all about the human body, and its permanent exhibition holds seven themed rooms covering the brain, sexuality and “diet as a somatic function and cultural achievement”.