You are here: Home / Europe / Entering the “Empire of Death” in Paris

Paris seems all about the now. The sensuality, the food, the constant smoking, the beauty all around, it’s all part of what seems like a worldview based on what’s aesthetically pleasing. It’s also where the French Revolution happened and priests were beheaded. It’s where the existentialists hung out and debated how to get the most out of life, free of false beliefs. You can drop in and experience all of it with All-Paris-Apartments.

They are unlike other services I have heard about because they emphasize anything from a budget or luxury apartment to mix with locals.

My point is, it doesn’t seem like a place where people worry too much about the afterlife.

My point is, it kind of makes sense they just dumped 6 million dead bodies in a pit. 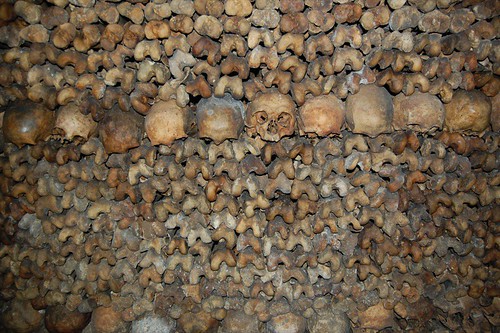 Okay, I know, I’m playing the French atheist card a little too heavy. Lots of places in the world have catacombs. But I can’t imagine any are as creepy, as fascinating, and as strangely moving as the one in Paris.

Visiting the catacombs is like descending into another world. You get off a subway stop and right across the street is what looks like a concrete booth. There really isn’t much fanfare, just a few tourists lined up. You go inside, pay a few euros and get your audio tour set. Then you walk down a very narrow spiral staircase for what seems like forever (it’s actually only about 19 meters, but the thing is so small and narrow that you just seem to spin downward. I felt like I was being flushed down a drain.)

For a while you walk along stone tunnels and slowly descend even further beneath Paris. You learn about the ancient stone mines that were the reason why all of these tunnels were created in the first place. There’s plenty of stone down there, so they’ve been used for a long time, from Roman times to the Revolution. You learn about how Louis the XV ordered the tunnels reinforced and you learn about the engineering of it, which is pretty impressive, but it’s kind of like watching the first ten minutes of any horror movie. (Okay, yes, they just moved into the house, I get it, the neighbors are weird, I get it, just get to the scary stuff already!) I came to see the catacombs, not an old stone quarry.

But then I saw this. This was carved by stone cutter working in the mines that used to stay below while his colleagues took breaks to the surface. He would stay and carve a miniature version of the prison he had stayed in years before. (Obviously, he had some issues.) It’s a very cool, and really intricate, sculpture. There’s an engraving in the wall honoring him. He died while he was working and the ceiling collapsed on him.

But you go further into the catacombs, about a kilometer or so, and you actually come to the entrance of the ossuary. Above the entryway to the tunnels that are lined with human skulls, there is a stone carving in French which reads Arrête! C’est ici l’empire de la Mort (‘Halt! This is the Empire of Death’). 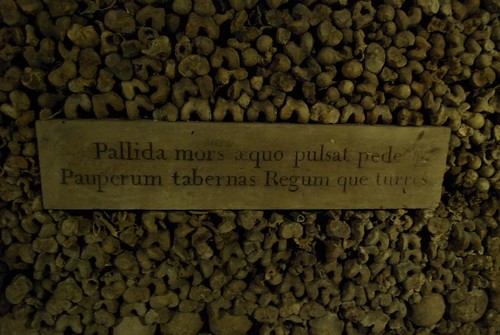 The background is really interesting, and you learn all about it on the audio tour, about how Parisian cemeteries were overfilling and they were becoming a health issue, you learn how they used to cart bodies from the cemeteries through the night to the catacombs, as priests followed and chanted prayers, you learn how Romantic era sensibilities led to the philosophical and religious quotes carved onto rocks throughout. But walking through the catacombs is not really about the how or why. It’s something to be experienced.

There are walls of bones on either side of you, for what must be kilometers. And they are constructed like legos, with the femurs stacked on top of each other, and the skulls serving to divide layers. And the skulls are all looking out at you. There’s no fence, no glass between you and the remains of 6 million people. Reach out, touch a skull (they’re surprisingly small. I’m sure they lose a few every year to weirdos who take souvenirs.)

It goes on for so long that you lose your sense of awe after a little while. But then you remember, these walls are made of human remains, and the creepiness and weirdness of it hits you all over again. I couldn’t help but think how long it must have taken to construct these walls, how long and how many people must have been here, stacking bones, some that probably weren’t even that old at the time. What was the most interesting to me about the catacombs was it represented an attitude toward the dead that seemed paradoxical and was difficult for me to reconcile. On one hand, throwing all of your dead in an old quarry seems to be a straight utilitarian, scientific approach to human remains. They were running out of space for bodies, so they dumped them in a hole.

But on the other hand the catacombs are a memorial to the dead far greater than any collection of tombstones could ever be. Instead of putting bodies in a carefully manicured cemetery, where flowers bloom and squirrels chase each other up trees and people go to be surrounded by fertility and life to distract from the death they came to witness, those who go to the catacombs are confronting death in much more direct and honest way. The families of those down there were forced to literally descend into the underworld; to see the skulls all around in the dark and now the permanency of death. And to imagine your loved one’s remains were undifferentiated in a large pile must have been hard in some ways, and I would love to read what contemporary commentators said about that, but it also presents what I think is a more beautiful view of death, that of returning to the big human pile, that of returning to the whole.