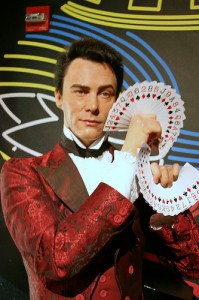 Las Vegas is not only the most popular place in the U.S. for gambling and casinos, it also has amazing nightlife. There are shows for just about everything, including illusion acts, circus acts, comedy, musicals, and adult entertainment. If you’re min Vegas, check out one of these shows.

There are currently three different Cirque de Soleil shows rotating at Vegas casinos, with Mystere being the most popular. Mystere gets its name from the mysterious creatures and death-defying acrobatic moves. While it doesn’t have a story, as Ka does, it is filled with bright colors, adding an interesting and mesmerizing visual display.

Another variety circus act showing in Vegas is Absinthe. Not only are there acrobatics and circus performers, but it is also adult-themed and includes comedy as part of the act. You can see dancing girls, tightrope walks and performers extremely close to you while watching the show.

For a magic show, Jan Rouven’s illusion act is quickly becoming one of the most popular shows in Vegas. Not only will you see many of the same illusion acts you have seen in other shows, but Jan Rouven goes above and beyond, adding a major death-defying element to his show.

If you aren’t able to get to Las Vegas, you could always play online casinos like Casino Dino, found at http://www.casinodino.com

. Here, you get access to all your favorite casino games, whether you’re looking for slot machines or card games. It is open 24 hours a day, and you don’t need to travel to play.