Birmingham is the second largest city in England. Since I've always had a soft spot for large cities that get overshadowed by bigger  neighbors (like Medellin and my home city of Philadelphia) I decided the Fiance and I should take a quick weekend trip there from London.

We hopped on a Chiltern Railways

train from Marylebone Station Saturday night. I guess I thought that most people would either be coming from Birmingham to London at that time, or not traveling at all, because I was surprised to see the train full.

Apparently Londoners do head to Birmingham on a Saturday night. 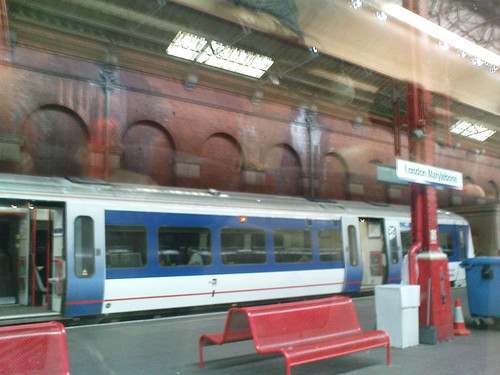 The ride wasn't bad at all; it's right around two hours. It didn't hurt that Yennifer had just come from her job at Pret a Manger, and had a bag full of free food for us to eat the whole way. If your going to be sitting down for two hours, you might as well eat.

When we got to the station I pulled out the ol' smartphone and quickly found us a Travelodge to stay at within walking distance. At 50 pounds a night, and right in the middle of Birmingham, I was eager to check in and get settled.

By settled, I mean we both passed out immediately. It had been a long day walking around London for me, and working for Yennifer. So we power-napped it up and then secured provisions. I bought small bottle of Smirnoff and two Smirnoff mixers (yes, that's right, we mixed the already pre-made Smirnoff mixers with more Smirnoff. I know, it's a rock star move) and went to a Kebob shop where we ate and the Indian guys running it gave us a bottle opener for the mixers.

After we ate, we took our drinks to an empty stoop right across from a row of clubs and bars and took it all in while we sipped our drinks. This is a strategy I learned in South America that I like: pre-drinking in the streets, watching the crowds moving in and out of the clubs and getting a feel for the kind of crowds that go to each place. It's relaxing.

Or it is usually. This time our Smirnoff revelry was interrupted by a rather large platinum blond Brit who ran by us in heels, screaming "He threw a bucket of water on me! From that window! Right on me! I'm soaked! A whole bucket." I noticed that she was slightly wet on her shoulder, although hardly soaked. Her voice made me think of the witch from Robin Hood: Price of Thieves. ("The Painted Man!")

After we had a good laugh about water bucket bombardiers, we entered into one of the many clubs and danced to a fun, if unoriginal, DJ spining top 40 hits.

At 2 a.m. we were in full on dance-mode, and ready to look for after hours clubs. But we only had one day to explore Birmingham, and we wanted to get started at a decent hour, so we returned to the hotel, and managed to avoid any buckets of water raining down onto the street.

The next day I woke up in a comfy hotel bed, which made us both really glad that we weren't in our London flat, where the sleeping arrangement consists of two twin beds pushed together. (Doesn't matter how close you get two beds together, it can never pass for one big bed. This is something I was in denial about for a long time.)

In spite of our desire to get an early start, we checked out at 12 on the dot, which is the required check out time. God only knows what happens if you stay beyond hotel check out times. I think it's the same thing that happens to you if you never bring back a library book.

After checking out, I threw on my backpack and we found the Frankfurt Christmas Market

, which yes, confusingly enough, is in Birmingham.

I know what you're thinking, and yes. That bit-mapped bird sweater over my left shoulder was as cool up close as it looks in this picture.
For those of us who didn't have Christmas Markets growing up (Americans) you should know that they are basically giant fairs with rides, vendors, and all sorts of Christmas themed attractions, from Santa (for kids to ask for things) and delicious Mulled Wine (to help parents deal with the kids asking for things).

The people of Birmingham, or "Brummies" as they are known, seemed really friendly. But for some reason I asked a man to take a picture of me and Yennifer in front of some Christmas spectacle and he declined.

"Excuse me, do you mind taking a quick picture of us?"

"Okay, thanks. The button is on the top right, here you go-"

He turned and left. I thought that was weird, so I asked a younger, friendlier looking young woman to take our picture. She also said no! What the hell Birmingham? Is this the hotbed of some bizarre anti-photography political movement?

I felt a little self-conscious that two different people declined to take my picture, so naturally I ate. A lot. There was so much good Christmas street food there, German Sausage, Pretzels, Crepes and Gingerbread, all of which I ate. I love Germany…in England.

There were also rides there. This is a picture taken while being violently whipped around in circles, several stories in the air, by some chain link harnesses.

I may or may not have thrown up a gingerbread house after I took this.

We had been at the Christmas Market for awhile, and we wanted to see it at night, when it gets lit up. That's the best part. But we didn't want to hang around till then, so we went to see the Birmingham Sea Life Aquarium

while we waited for the sun to go down. (Which, in England in this time of year, doesn't take long.)

I just wanted to see the little guy above eat things off his belly. Unfortunately, he didn't. Apparently the otters in captivity are more civilized, and eat with chop sticks.

Did I just blow your mind?

We spent more time at the Aquarium then we meant to, so we had to head back to the Christmas Market quickly to see the lights before hustling to the train station for our train back to London.

Finally, a normal human being who would take a picture of other human beings. Thank you, Sir!

You can't tell from here, but these were all actual Elves.

We were exhausted when we got to the Train Station, and we sat on the platform bench, falling asleep next to each other until the train came and woke us up. Startled, we jumped up and hopped on the train.

After a few minutes, however, I realized that this wasn't the way we came into the city, and looking at the first two stops, and the list of stops….dammit. I sheepishly confirmed what I knew with the man sitting next to me: we were on the train headed in the opposite direction of London. I told Yennifer and we got off the train at the next stop and a different train to London. After confirming I was headed home multiple times with people around me, I fell asleep, with dreams of Frankfurt, I mean Birmingham, dancing in my head. Along with sugarplums, whatever those are.