You are here: Home / Uncategorized / A Real Roman Holiday With Hillary’s

In my travels around the world, I’ve seen many cities which capture the imagination and open the mind of travelers, but none nearly as much as the historic city of Rome. There’s a huge tourism market in Rome, but honestly most of the fun comes from just wandering around its cobblestone streets and exploring the Piazzas, either by foot, bike, or motorized scooter, if you feel like recreating some classic cinema. This is a city which was at one point in time the very center of the civilized world, and that pulse of history seems to beat with every step you take through it.

Rome celebrates its history and invites you to step back in time with decidedly modern spins. For example, there are many places you could learn to speak Latin, or, alternatively, you could go to Gladiator school and learn ancient combat and weaponry techniques. That choice is pretty much a no-brainer for me, but to each their own. For the hiker and outdoorsy person, the famous Seven Hills of Rome offer the best views of the city. (There are actually a lot more than seven, though. Keep that in mind.) Then of course, there’s the points that any good traveler must see, like the Colosseum and the Sistine Chapel. And once you’ve gotten your culture in, you can try out your best Italian pick-up lines at the city’s multitudes of clubs, bars, and discos.

You don’t have to be Julius Ceaser or Audrey Hepburn to spend time in Rome. In fact, right now, U.K. window fixure company can get you there for free. In celebration of Hillarys new roman blinds collection, the company is offering a contrast for a weekend getaway for two to Rome. All you have to do is like Hillary’s Facebook page to enter. So come on, Rome is waiting. It’s time to do as the Romans do, which, as far as I can tell, is eat a lot of delicious food. 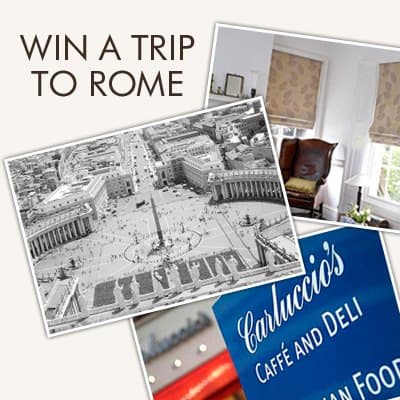