I woke up the next day at my normal time; 12 in the afternoon. Breakfast ended a few hours before so i changed my plans to get breakfast before going siteseeing for the day. Just as I was walking out of the hostel one of the workers introduced himself as Marcus. Marcus and I spoke for a few minutes and we decided to get lunch together. Afterwards, he would take me site seeing.

In a neighborhood full of eateries costing at least $10 a meal, Marcus showed me an all you can eat place for $4. We loaded our plates with different salads, chicken, farofa (roasted manioc flour), etc. But Marcus then commented that my plate seemed empty. In reality, I had filled up my plate. But in comparison to his, and every other patron in the restaurant, it was hardly close. Brazilians, and all South Americans for that matter, treat lunch as the biggest meal of the day.

After lunch we caught a bus leaving from the beach to Pelourinho, the historical center. Our first stop was Mercado Modelo, a landmark of Salvador.

Despite being a tourist trap, this building used to house the old Customs House and now functions as a warehouse full of handicraft stall.

In addition, black slaves were held in the basement when they just arrived from Africa. Very humid and very hot, conditions must had been very bad. 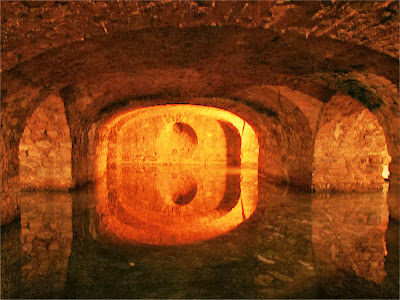 I really can’t explain why I decided to pose for a picture down here…let alone smile.

After purchasing a pretty stylish t-shirt we walked a few blocks to the city’s elevator that transports people to the upper city.

A view from the top.

As I walked away from the elevator I noticed some graffiti. I quite like it.

After passing the graffiti I came across this touristy gem. Another cross overlooking a city in South America. Who would have guessed?

I should have taken the obligatory cheesy photo of myself pretending to hold up the cross.

Pelourinho is full of beautiful colonial buildings and plazas built by the Portuguese long ago.

Some could really use a new paint job, though it shows more character the way it is.

It was getting late which makes for the best photos.

We took the elevator down and bused it back to Barra…the posh area where I and most other foreigners stay. Explains why it’s nearly impossible to find a fairly priced meal.

Back in Barra I met a German backpacker who just began his trip the same day. We journeyed off into the night in search of food and in his case, pot and food. I was walking beside him and look over to see him in mid conversation with a vagrant, setting up a purchase. He had the guy run to one of the nearby favelas to purchase his drugs and deliver it to the restaurant we decided on.

Local food can taste good but sometimes its not exactly what I expect. At this restaurant I ordered chicken and instead received burnt chicken bones.

Afterwards we wandered to the Barra lighthouse.

…and then back to our hostel for an early night.