You are here: Home / Asia / The Best Hotels in Dubai Are Pretty Spectacular

Dubai is a ridiculous place. If you were playing a game of Sim City, and you had some sort of cheat codes that

gave you an infinite amount of money and allowed you to build anything you could imagine, you might create something like Dubai. Dubai is what happens when a bunch of oligarchs with an infinite amount of oil money decide to build a city, and they don’t have to deal with the bureaucracy or noise that democratic institutions create. They can do whatever they want. So they build the world’s tallest tower, the build world maps in the ocean, they create the world’s largest airport. It’s a fantasy city. It’s like a real life Epcot Center. It’s quite, frankly, crazy. So it’s not that surprising that the Best Hotels In Dubai would be, shall we say, indulgent. Fancy. Crazy.

Take the Burj Al Arab, for example. It’s 1,053 feet tall and is the fourth largest hotel in the world. It’s built on a man-made island, which is 1000 feet from the beach and is connected by a private bridge. It looks like a sail.

It has been described by one British journalist as the “world’s only seven star hotel.” There is a restaurant high above Dubai near the top of the hotel, and a restaurant at the bottom which features a 260,000 gallon seawater aquarium, and which you can only get to by a simulated submarine trip. 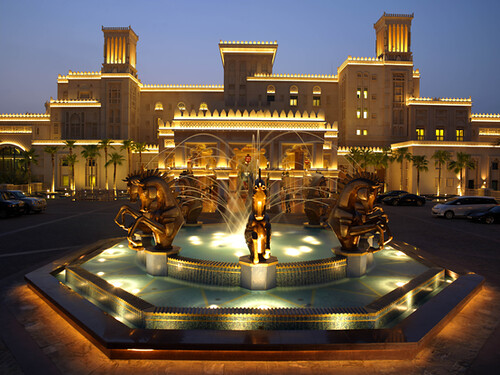 Or if you aren’t impressed by verticality, you might be impressed by the Madinat Jumeirah resort. It’s a five store resort in Dubai, the biggest in the Emirate, and it encompasses nearly acres that resemble a traditional Arabian town. The resort contains more than forty bars and restaurant.

There are two five star hotels on the resort, one of which is Al Qasr, or “the palace” and it is exactly that. It’s designed to look like a Sheikh’s summer residence. Even among all the decadence and luxury in Dubai, it stands out.

Or if you just want more restrained, old-school luxury, there’s the Shangri-La, which is right downtown.

If you are going to Dubai, you should stay at one of these places. If not, just walk around them. Soak in the luxury and the money that wafts through the air. And be thankful that there are so many dead dinosaurs in the ground to make all of this possible.

Before you plan your travel ensure you apply for a Dubai visa online to make your travel smoother.