You are here: Home / Europe / Top Street Food to Explore in London

Are you a street food junkie travelling to London? The standard of street food in London is getting higher and higher due to the recent surge in the city’s street food market. It is safe to say that the capital of the UK is steadily turning into a street food force to be reckoned with. According to Change

, when the City of London’s Corporation terminated the KERB’s street food market at the Gherkin, a campaign called “Make The City of London Taste Better” was launched. This campaign aimed to spread awareness regarding Londoners’ right to be offered more variety in lunch life. In January 2014, due to the strong support from Londoners who helped recognise the value of Independent Street Food, the KERB street food market was officially allowed to resume at the base of the Gherkin. This marked a major success for all street food vendors across the city and even saw the entry of several new and diverse street food stalls. Tourists travelling to London can explore the top street food stalls by saving on accommodation at a budget hotel near London’s major tourist attractions. This would also allow you to explore places such as Olympia London, Piccadilly Circus, the O2 Arena, Kensington Area, Earls Court and more. Here’s a look at some must-try street food stalls. 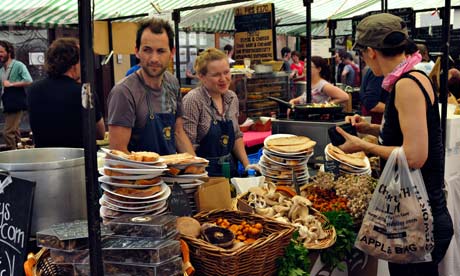 If you are in the mood for some juicy pork with tender buns, this is the place to go to. This stall has bagged several awards, including Winner of Best Snack and People’s Choice at the 2012 British Street Food Awards. It is still a loved spot and the most consumed snack is the slow-roasted pork belly bun topped with cucumber, spring onions and sticky hoisin sauce. There also are options for vegetarians, such as the pillow soft steamed buns with vegetarian patties and veggies. This stall is located at the KERB in Gherkin. Look for a good budget hotel in London

such as City Continental Kensington London Hotel, since it is conveniently located close to major street food markets and popular tourist destinations.

For those who want to explore Spanish cuisine, there is no better place than Churros Garcia in London. A finalist at the 2010 Street Food Awards, this stall is a family business that has been making handmade churros for more than 40 years. You can catch them at the Real Food Market, Portobello Market and Broadway from Friday to Sunday. Don’t miss trying the doughnut’s continental cousin, churros. This Spanish snack is soft on the inside and crisp on the outside, nestled in a snowstorm of sugar. Moreover, like in Spain, you are served a pot of hot dark chocolate literally dripping all over to accompany your churros.

If you want a feel of the traditional 50s American diner, you should visit Lucky Chip at the Netil market every Saturday. This stall has brought to London the taste of classic American fast food. You can get hand cut chips with the skin, served with sweet chilli and wasabi mayonnaise. You could also try meaty aged beef burgers that are loaded with the most exquisite cheddar. You can even try shepherd’s pie if you are looking for something more British.