You are here: Home / Uncategorized / Travel Itineraries for Myanmar

Myanmar, or Burma as it was known until fairly recently, is a country remarkably rich in customs, culture, history and age-old traditions. It’s a sort of time capsule, preserved like a SE Asian fly in amber with its heritage intact but largely undiscovered by the outside world. After some recent upsets Myanmar is finally starting to open up to the outside world, and there’s little doubt that as it does so it will increase in popularity, so now’s a good time to get in there before the crowds arrive. Lots of companies organise travel itineraries for Myanmar, or alternatively you can start thinking about arranging one of your own, based on your particular reasons for coming here.

Many of the attractions of Myanmar are famous across the world, such as the Shwedagon Pagoda in Rangoon, whose golden dome thrusts like an exotic lance up into the night sky, setting it ablaze with living memories of a forgotten civilisation and empire. Myanmar has a sort of dangerous edge that other countries in the region seem to lack, probably due to its relative isolation and air of mystery, and this adds a glamorous element to any visit. Shwedagon is generally reckoned to be not only a supremely beautiful pagoda but one of the oldest of its kind on the planet. It incorporates over 30 tons of gold and is encrusted with priceless gems, so any itinerary for Myanmar should start out from here in the ancient capital Bagan, just to set the cultural scene properly. There’s no excuse for a sense of cultural superiority in a city that was world-class when we were still living in mud huts.

There are actually more than 2000 separate pagodas in Bagan, a city that as capital of the ancient First Myanmar Empire attracted unprecedented riches in the course of the 11th century and endured for over two centuries before it was overrun by the Mongols. 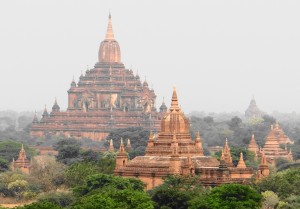 Mandalay is the cultural capital of Myanmar and the last capital of the deposed kings of Burma. Come here for a fabulous tradition of arts and crafts, and see the Mahamuni which is the country’s most sacred image of the Buddha.

Up in the mountains, Inle Lake is certainly worth a visit. Home to the indigenous Intha people, this is a vast highland lake in Shan State and you can hire a boat to take a tour of the villages and famous floating market. There’s a colourful pagoda festival held here every year in late September or at the start of October which you shouldn’t miss if you’re around here at that time.

You can take a hot air balloon ride over the pagodas of Bagan or a boat up the river to Mandalay to experience this fabulous gem of a country in all its deep traditions and cultural and natural diversity. As the seat of a once great empire, the region around Bagan in particular is a palimpsest of cultural interests and a fine introduction to a country that is just beginning to emerge from the mists to take its rightful place on the map of Asia.