You are here: Home / Uncategorized / What Does the Greek Crisi$ Mean to You?

Travel has made me more aware of international news and events. Every place I go is now a reference point for articles I stumble across in the New York Times. Yes, I will read about Spain’s new Prime Minister because I spent a few months their five years ago. It doesn’t make any real sense, but just a little bit of context can make a place seem alive, familiar, and force you into an emotional investment, however small. Any stories about the Colombian drug trade, I always read. (Not because I’m worried about drug prices, but because I spent some time in Colombia. Also have you seen the submarines the drug lords build? Crazy.)

But the other reason I now read more international news and journalism than before I traveled is that I want to try and identify the next great travel destination. And a lot of that has to do with watching the international economy, which admittedly is increasingly interconnected, and figuring out which countries are getting cheaper and which are getting more expensive. Naturally, I am interested in the fate of the Euro. When I was in London I was reading about the debates constantly, and when Cameron pulled out of the talks, I actually really wanted to know why.

That being said, it’s always interesting for a traveler when a great travel destination undergoes a serious financial crisis. (Note that I said interesting, I’m not wishing a financial crisis on anyone. I graduated college in 2008. I know how much fun finding it is trying to find jobs when

Greece is a great travel destination. Besides the incredible amount of history there, and the fact that it arguably the birthplace of all Western Civilizations, the Greek islands are one of the most beautiful places in the world. So what does it mean for travel that the Greek economy is falling apart, and that the rest of the EU is debating whether to save it or not, and the fact that it’s possible that Greece might get off the Euro?

Well first of all, let’s analyze the exact nature of the crisis….no, that’s way too hard. I don’t understand it at all. Greece can’t pay their bills is basically the jist of it. I think. 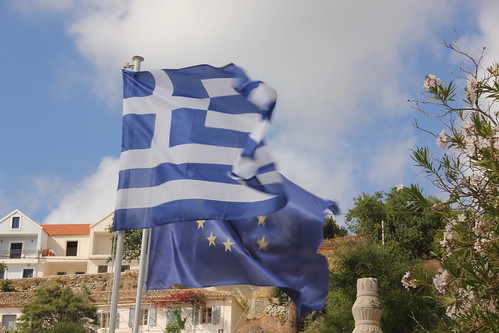 But what does this mean for the traveler? Well, since Greece is still on the Euro, it doesn’t mean it’s going to suddenly get a whole lot cheaper. The Euro has been down in relation to other currencies because of the more general Euro crisis, which Greece is definitely a part of, but it’s not the sole culprit. One would think that travel destinations, like hotels and resorts, would lower prices due to an economic downturn. But they haven’t because tourism is actually up, probably do to the old adage that “there’s no such thing as bad publicity.” Still prices have been down the last few years. If Greece does get off the Euro then things could drastically change. That might have more to do with transportation than anything else, and the well documented tendency of European public sector employees to strike due to everything from major cuts to perceived slights.

But here’s a reason to spend a week in Greece that has nothing to do with the Greek economy: it’s awesome there. You can cruise around the same seas that Odysseus did and get just as lost. And trust me, the descendants of Helen of Troy are still kicking around. Plus, isn’t travel about adventure? We should always travel in interesting times. Especially when it’s at world class resorts. Prices might not be falling through the floor, but it’s still relatively cheap and beautiful. Plus, help the people out and spend your money there.