You are here: Home / Latin America / Peru / A Peruvian Adventure

I grudgingly walk back to my hostel at 3am in Bogota, Colombia, after an amazing last night out where I met a beautiful girl met that night and would absolutely meet up with her again had I not been leaving in a few hours. Still, its a good way to leave on a high note like that. I grab my bags, call a taxi, and exchange goodbyes with friends.

The taxi driver is delusional, blasting poppy techno all the way to El Dorado while banging his head back and forth for laughs. Like always, I make it to the airport with lots of time to spare. My jeans reek of spilled beer and my hair is greasy from a long day. I look out of place amongst the South Americans with clean clothes, not reeking of beer and cologne.

I step off the plane in Lima, Peru, around 9am and follow the yellow path that is built like a maze into the actual airport.

I quickly leave the place to go exploring.

Some kind of gambling

They even named a street after 2Pac

I am here in Cusco at just the right time as festivities begin at night. The Inti Raymi festival is the second largest festival in South America. Hundreds of thousands of people converge on Cuzco from other parts of the nation, South America and the world for a week long celebration marking the beginning of a new year, the Inti Raymi, the Festival of the Sun.

Just around the main plaza are a bunch of rather expensive restaurants. But most of these restaurants have balcony seating and I manage to get a table overlooking the parade. I manage to spend a few hours at Baghdad Cafe only spending $7 on a small appetizer.

Later in the night I join in on the festivities and drink wildly with local families dressed in the typical traditional clothing. It’s a sight to see short, toothless men dressed in rainbow colored ponchos stumbling around with a bottle of wine in their hands. Or women carrying their baby in a sack, dancing while forcing down dixie cups of beer. The place is packed and maneuvering through the crowd is not working.

I wake up rather late the next morning in a shivering state. It’s freezing in this city when the sun is hiding behind the clouds. A cold shower is even worse.

I casually stroll back to the main plaza expecting to see the festivities. I am absolutely unaware that they take place at the ruins a nice hike up away from town. I am honestly the only person in the entire city who made this mistake.

I climb a massive hill in order to watch the Inti Raymi parade, celebrating the Incas. As i begin my climb a group of police rush down the steps past me.

Old women walking llamas and alpacas effortlessly pass me and other tourists on the way up.

I pass local vendors cooking up cuy (guinea pig) and other tasty meat as I continue uphill for a solid hour.

Everyone gathers on these massive rocks to watch the procession down below. I never experienced so many people in the same place at once until I reached Brazil. It was packed. The rocks are slippery and people constantly fall, knocking down others in their path.

I wake up the early at 4am to catch a train to the Machu Pichu! While many people opt to hike the Inca trail, I cannot be bothered to do that as I am on vacation. I know what it is like to go trekking at high altitudes and while worthwhile, it is not easy. I told myself I would never do it again after trekking in the Bolivian andes a few year back.

The train ride is freezing as I opted for a third class ticket on the “Backpacker” train. The train only takes passengers to a town close to the Machu Pichu at Aguas Caliente.

From there I board a bus full of Japanese package tourists up to the ruins.

Towards the end of the day I wander alone into one small hut and jump back as two alpacas are just chilling. The three of us spend the next hour staring at each other as we escaped the heat.

I board the bus back to Aguas Caliente with a bunch of old British package tourists this time,
and board the train back to Cusco. I board the second class train this time as the other is sold out. A long and deep conversation with a middle aged American tour agency owner is interrupted by a fashion show performed by to lovely train attendants. 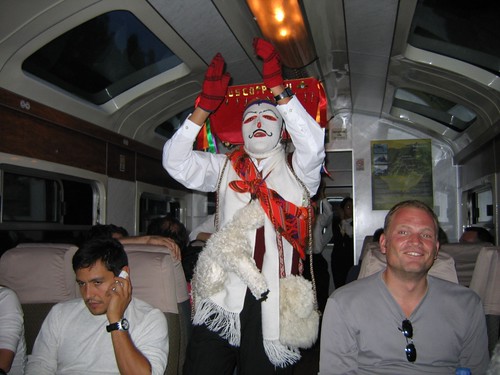 I wandered a bunch walking all around Cusco each day. But the next day was solely that.

I wake up late after a long day at the Machu Picchu and wander into a market for lunch.

I buy a bag of coca leaves and force the woman to explain how to properly use them. My cluelessness is rather absurd because she and everyone she knows has been chewing them their whole life. Stupid Gringo. Chewing is done softly, trying not to crush them totally, only enough to break the cell membranes and then let them dissolve slowly in the saliva. When the half crushed leaves are sufficiently dampened (10-15 minutes), the chewer adds the llijta or any other alkaline agent (such as sodium bicarbonate).

A few minutes later, there is an intense anesthetic effect in the cheeks, throat and tongue. It is certain that the ingestion of the juice exerts an anesthetic effect on the lower intestinal tract and at the systemic level. This would explain the custom in Andean countries to chew coca leaves or take coca infusion to alleviate pain over a wide range: headaches, toothaches, intestinal cramps, etc. Its use is frequent as a dressing topically applied on the painful areas, for instance in the area of a broken bone or arthritis.

The absorption of alkaloids is rapid and the elimination of fatigue, a feeling of euphoria or antidepressant action is felt within 15 to 20 minutes, with the appearance of an increase of psychomotor action, a state of tension typical of alertness, there is an increase in activity or the desire to do something. Sensorial functions become more intense. The higher intellectual activities are faster, there is a slight feeling of consciousness expansion (which could explain its use during religious rituals). In the emotional area, the effect is stimulating, the individual feels euphoric, happy, optimistic, and willing to undertake action. Corporal needs, such as hunger, sleepiness, and restful are postponed by the energetic impulse of the time.

Just as I pop the first leaves in my mouth I run into a friend I met a month back in Colombia. Turns out he is shopping for the San Pedro Cactus to create a traditional hallucinogenic drink.

As I continue on wandering through Cusco I see a sign advertising bungee jumping. I make an impulse decision to go for it, and costing only $60, was a bargain.

At this point I had enough with my hostel and managed to move up in the waiting list and secure a bed at a proper hostel with wooden floors and hot showers. A bunch of us (Europeans and Australians) pound a few $5 bottles of rum and walk to Cusco’s most popular discotec, Mama Africa’s.

It is almost a tourist attraction in itself because it always came up in conversation when I was traveling in other countries like Colombia or Ecuador.

I taxi it back to the airport in Cusco for my third flight that week for another day in Lima. My bargaining skills fast improve as I instead opt to walk completely away from the airport and hail a cab off the street, where I pay only 25 soles compared to 40 last time.

Lima is actually a city worth spending more days then people seem to recommend.

I begin my day with a visit to the Catacombs at a church, which served as the first official Catholic cemetery in Lima, at a time when the dead were laid to rest in catacombs beneath the church. I visit the catacombs and view the hundreds of centuries-old bones and scores of skulls as part of the guided tour.

Next stop is a black market.

I eat a big plate of fish ceviche for lunch.

I return back to downtown Lima to have a walk around the area.

I end up in Miraflores for stroll through the park and catch a free concert. 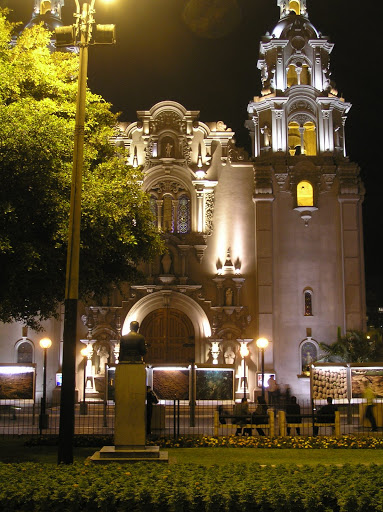 I return to my hostel just in time to join in on the festivities.

Overall I enjoyed my time in Peru. Like any country in the world, visiting for only 1 week meant I only scratched the surface of what Peru has to offer.