You are here: Home / Latin America / Argentina / …And My Life In Argentina Begins

Upon arriving in Buenos Aires I checked into my new hostel

and minutes later watched a young Australian girl walk into the hostel in tears. While standing right outside the door of the hostel, a man had grabbed her bag containing her passport, camera, credit cards, etc.

I then slept most of the day now in downtown Buenos Aires. 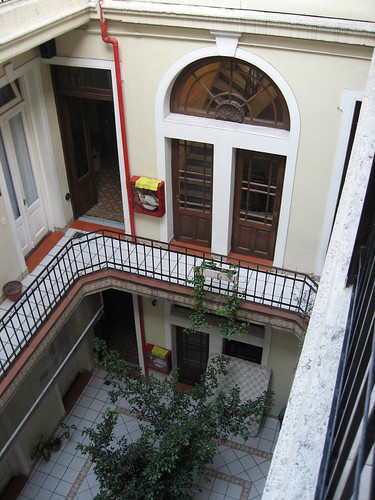 Upon arriving in Buenos Aires I checked into my new hostel and minutes later watched a young Australian girl walk into the hostel in tears. While standing right outside the door of the hostel, a man had grabbed her bag containing her passport, camera, credit cards, etc.

I then slept most of the day now in downtown Buenos Aires.

When I finnally woke up that night I found myself all alone in the enourmas hostel bar on a thursday night. The first person I met was a Frenchman named Thibaud. Thibaud had taken a month off from Renault in Paris where he works as an engineer, in order to travel throughout Argentina.

Thibaud then introduced me to an Israeli guy with the most interesting name yet. Nimrod!

The three of us swapped the usual travel stories and planned to go out later that night. One thing I heard repeatetlky about Buenos Aires is that the nighlife does not get going till around 3am. Whether it was true or not, I did not know. But that prompted me to take another nap before heading out. The only problem is I never woke up from that nap in time to go out with them. A wasted thursday night in a city that is supposed to have some of the best nightlife in the world.

I woke up the next morning in tourist mode and took the bus to La Boca.

La Boca is an area of the city situated by the port. Its popular with us tourists because the buildings are painted with lots of tacky colors, its cobblestone streets, nice parillas (the famous Argentine Steak restaurants), street vendors selling art, and tango dancers putting on shows in the street.

The reason why the buildings are painted so colorfully is because when the poor immigrants arrived in Buenos Aires they moved to La Boca, one of the cheapest areas to live and right next to the port where the poor usually worked. They ended up taking the leftover paint used for ships and used it to paint their homes instead. So one day they may find a small bucket of yellow paint and use it on a window. Another day they might find some leftover red paint and paint another window. You get the point.

After taking in the atmosphere I walked away from the tourist area of La Boca and found a cheaper parilla where I ordered steak and wine for about $10.

I met up with Thibaud back at the hostel where he wanted to buy me a beer but instead I went for a shower. Big mistake. He left soon after and did not return until about 5am, with two stunning Brazilian girls (also from the hostel).

The reason I saw him at 5am is because I never went out that night. I saw Nimrod and started talking with him and his Israeli buddies for a while until they all went out to a casino. Its always hard to socialize with a big group of Israelis because they like to speak in Hebrew, all the time.

After they left I drank a few beers with a German guy. Only he would not stop telling me about how upset he was that some guy was sleeping in his bed. Weird.

The next morning was a day for chores. I bought an Argentine sim card for my Colombian cell phone for a buck. Then I brought my cell phone to another shop where they unlocked the phone so that it would work with a different cell phone company. It always seems to be that foreigners own these shady places. This time it was an Indian run business but the guys were great and now I have a working cell phone in Argentina. This is important because I plan to fill up my phone book with the numbers of many beautiful Argentine girls!

Fun fact. The most popular cell phone service in Argentina is Movistar. The jingle for movistar is the song “You Get What You Give” by the New Radicals. I love that song!

I woke up on saturday to the sound of a marching band. It was deafeningly loud. If it wasnt a marching band it was some of the loudest construction I have heard. I really could not tell if I was dreaming or not.

This prompted me to start my saturday early and so I headed to Palermo by subway to walk around and possibly look for an apartment.

Buenos Aires has a really extensive subway system and its around $25 cents a ride.

Before coming to Buenos Aires I heard Palermo was a hip area of Buenos Aires and a great place to be living. It turned out to be a really nice and chic area of the city with an abundance of cafes, restaurants, and clothing stores.

After a calming coffee and some more walking I took the subway back downtown and joined a bunch of travelers at the hostel bar. I have never been so friendly in my life these past few days having approached so many other travelers.

This time I introduced myself to a table of Australians here in Argentina for their friend’s wedding. A while afterwards when they left I met some new Israelis. Then a Brazilian. Then an absolutely nuts Frenchman. Then finally some people from the UK.

After many drinks in the hostel I finally joined some of them for my first night out in Buenos Aires at Pacha. This is one of the biggest club franchises in the world. Pacha is definitely the place to go if you want good house and techno music in Buenos Aires.

Its the type of place where its not uncommon to see sunglasses on most people by 4am.

After a big party that night I woke up ready to work. I was way behind on the work for my businesses. But Thibaud again insisted on buying me a beer and talking to me.

This prompted me to excuse myself a few minutes later and check out of the hostel in order to go to one much closer to university. Orientation for my semester at the Universidad started the next day!

After checking into my new hostel in the Belgrano neigboorhood I took a walk to my new university to check it out.

It is essentially just a high rise bulding. Everything was closed and so this is all that I saw. Back to the hostel I witnessed something strange. The owners and their friends were apparently hosting a wizard party because they all had these strange costumes and wizard hats on. I saw this through the window and decided to go eat some pizza instead of interrupting them.

When I finnally did decide to go back to the hostel I was offered a glass of champaign. I don’t know why but it was kind of cool.

The only guy sharing my dorm room was Chilean and had gone to the Valley Forge Military academy in the U.S., just 10 minutes from my home. That was the only cool thing about him since it turns out he is a complete ass. While I tried to go to bed at the normal hour of 12 with the lights off and fan on; he did not seem to want to let me. Each time he came into the room he unplugged the fan, turned on the light, and did not shut the door when he left. This happened nearly 10 different times throughout the night even when I had told him to stop.

I woke up the next morning tired, excited, and really nervous for the first day of my universities orientation. Who would I meet? Will I understand people speaking Spanish? Will the classes be interesting?