You are here: Home / Latin America / Colombia / Check Him Good

Beep…beep…beep…what the…? I was surprised the alarm clock didn’t wake up the entire house. I left the house at 3:30 am on new year’s day for the Miami airport not nearly as excited as I should have been, considering I am away for 8 months. I was tired.

“Check him good”, said the airport security guy in Spanish. I walked through the metal detector with ease. Not satisfied, security ordered me to step aside. I walked into that box which sprays air on you. They even swabbed my shoes and ran it through this high tech computer system to check for whatever it is they were looking for.
I overheard some guy in front of me answer immigration that he is staying at Platypus when asked.
“Hey, how about we share a cab since my hostel is right next door to yours”, I said.
What a mistake! But at least the mistake makes for an interesting story.
This is Alex. 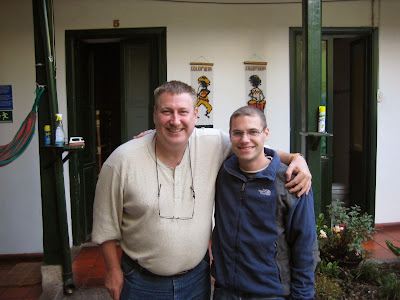 As you can see from the picture, he is an ordinary looking middle aged man. I should have known something was wrong since he was wearing shorts and a Hawaiian shirt when we first met in the airport.

The taxi dropped us off at my hostel since Alex did not even have the address for his hostel. I quickly put my bags inside of the hostel lobby and then walked Alex to his hostel. We agreed to eat lunch together, being that we are essentially the only people we know in this city.
Alex appears normal. He tells me a bit about himself. He recently moved back to Canada after living in South Korea for 10 years. He used to own a company that earned money by placing people in English teaching jobs in South Korea. He would also run a camp two weeks each year that took South Koreans to English speaking countries to learn English. He also recently divorced his Russian wife.
“Why are you in Colombia?” I ask.
“I like to take short vacations and see the sites”, said Alex.
As you can tell, he appears quite normal and we had a pleasant conversation about Colombia and its politics over lunch. A long 5 hours later Alex pops into my hostel unannounced. We chat for a bit and he offers to take me out for a night in town on his dime. Who am I to refuse?
Alex suggests we go to the Zona Rosa for some drinks. In Colombia, the Zona Rosa is an upscale area packed with nice restaurants, hotels, bars, and discoteches. We sit down for a few beers and that’s when he reveals his other side.
The purpose for Alex’s trip is actually to spend time with as many Colombian “working girls” as he can. That’s what Alex does. He visits developing countries for a few weeks at a time to spend time with as many whores as he can. So he’s a sex tourist. It all makes sense now. He suggested we visit the Zona Rosa (translates to pink zone), because in any other country it would refer to that really seedy area where whores roam the streets. And the Russian wife…yeah, definitely a mail order bride.
After finishing our beers, we stroll through the neighborhood a bit. He even hits on a few girls who can’t be older than 15. He also started telling me about some guys he knows and what they do for a living. To give you an example of the type of people he associates with, he told me about on British man he knew in South Korea who owns a porn website…of which he stars in the films himself. Um, Yeah.
As we stand on the street corner trying to hail a taxi, Alex says, “Jason; I need to be honest with you. I actually just spent 2 years in prison in South Korea. I was in solitary confinement for those two years.” He proceeds to explain what it’s like and it sure was fascinating. Ever seen the show Locked Up Abroad? He deserves to be on that pronto!
Why was Alex sent to prison? According to Alex, he refused to pay some government officials a $20,000 bribe that was expected for something having to do with his business. By the way, it looks like this travel company was really just a company for sex tourists. He would probably lead a few hundred South Koreans to some country in Europe and organize everything for a bunch of people hoping to pay money for sex. Anyways, a few months after refusing to pay the bribe, Alex was arrested.
A young British man was arrested for possession of Marijuana in South Korea and ratted out Alex too. Alex was arrested and spent the next two years alone in prison. He nearly went insane spending every hour alone, until he started reading. Alex read over 1000 books during those 2 years.
Why did I not immediately make up an excuse a get away from him? Beneath all of it, he treated me kindly the entire time and I never once felt threatened around him. There are some interesting events that happened that night but I am going to leave it out for now. The following day he popped into my hostel again, unannounced. We spent some more time chatting and I told him I was leaving Bogota the next morning. I switched hostels just in case and have not seen him since.