You are here: Home / Latin America / Bolivia / Defeated in Bolivia

I could not wait to leave Bolivia. For all of its spectacular site-seeing activities that I have written about

, the country is one that can frustrate and make even the most seasoned of travelers overjoyed to leave and never return.

My utter dislike for Bolivia really hit me towards near the end of my trip after while in Bolivia’s second capital city, Sucre

. A country that has two official capital cities should indicate that something is a little off with the country. It makes little sense just like a person with two heads would seem strange.

I met a friendly French student on summer break from studying in Canada on my bus to Sucre and together we took a taxi to the city center to share a hotel room. That is often what happens when traveling and I was glad to already have a buddy in Sucre.

We found ourselves at a cafe overlooking the city one afternoon.

It was sunny with beautiful views and awful service as usual in Bolivia. As one of 10 patrons in the cafe I waited 20 minutes for a menu until I gave up as usual and walked to the register to ask for one and order my food.

I sat in a lawn chair and waited for a nearly half an hour until I could not be patient any more . I walked back to the register and inquired about my order.

“Oh sorry we are out of eggs. Do you want to order something else?”

The French student, I, and an American girl we met had dinner and then attended a folkloric concert that night for “traditional” Andean music and dance.

The production was wonderful but some of the rules for customers make me scratch my head.  The theater had a sign posted that any pictures taken would cost $1 each, and videos $2. Instead of promoting the show to other travelers on my blog I cannot because I have no pictures to show.

The next day I opted for fast food having learned my lesson not to order food at a regular restaurant (note the long wait happened many times before in other places).

“Excuse me, can you please where tell me where Kilómetro 7 is located?”

I asked this question to two strangers on the street. Kilómetro 7 happens to be a well known street so its a pretty simple answer. Both times the people ignored me completely.

I went to the bathroom to go wash mine. There was no soap. 9 out of 10 times in Bolivia a restaurant’s bathroom does not have soap or toilet paper. I did notice half of the restaurant patrons wearing disposable masks to prevent swine flu though. Little do they realize that the mask only protects a person from spreading the virus and only for 1 hour.

Sucre was a disappointment overall even without the irritating occurrences. I made my decision to leave Bolivia having seen nearly every city and done every activity that interested me. It was time to leave and I was glad.

The bus to the border of Bolivia and Argentina was a straightforward 10+ hour ride on rough, bumpy roads. 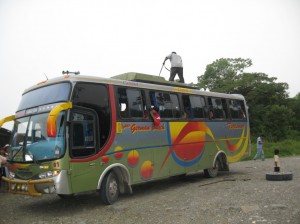 For once in a long time I felt fortunate because the seat next to me went unoccupied. But the two men sitting in front appeared unfriendly asking me questions I had trouble understanding in an uncomfortable tone.

8 hours into the ride close to midnight we stopped in a tiny town for a quick meal. This is usual as the bus drivers deserve a break and its a place to pick up more passengers. I re-boarded the bus and this time a short, middle-aged Bolivian man sat in the unoccupied seat next to me. His teeth were missing and he smelled somewhat funky but overall I judged him as harmless. I initiated a short conversation since we would be spending the next 6 hours sitting next to each other.

“Very good and you” -him

“A little tired but ok -me

“Ah a gringo. Where are you from”

“Oh that is nice do you like Bolivia so far? Where have you been”

“What are you going to Villazon for? Do you have family there?” – me

“No, I don’t have any family. I work there. I bring products from Bolivia and resell them across the border in Argentina.” -him

Our conversation died off soon after so I turned on my music and closed my eyes. An hour or so later I noticed he was sitting awfully close to me. I looked over to him but he looked fast asleep. Oh that makes sense. He is asleep and does not realize he is taking up a lot of my personal space, I thought.

Then he placed his right hand to rest on on my left shoulder. I shifted further to my right and lowered my shoulder to gently remove his hand. For the time being I felt comfortable enough to close my eyes.

But as I shifted my body further to the right he took up the remaining space. I had enough and boxed him out to regain my lost space.

His hand went right back on my body, but this time to my groin area. I countered this move placing both of my hands underneath his and then shifted to the right some more giving up the space I had recently taken back.

You have to keep in mind that it was past 2AM and the bus was nearly pitch dark and quiet with most adults, children,  and this man asleep.

He rested his head on my shoulder. I shifted even further to the left and put my hands up on the armrest to hold on to my seat. At that moment he began a gradual move towards putting hind hands on my crotch. I blocked this move putting my hands back underneath.

I felt strongly uncomfortable but sat in this position for a long time, counting the hours until we would reach our destination.

But then he turned aggressive and moved faster. My hands were blocking my crotch but he powered through to place his hands underneath, at nearly 30 separate times.

“Stop it now”, I screamed looking at him straight in the eye.

He retreated to the normal position and I regained my composure.

Just  a half hour later he went at it again. We played the same games until I snapped for a second time and physically pushed his hands away with strong force. The two men in front of me turned around and stared.

As a foreigner riding a freezing, bumpy bus having to stay alert way past a reasonable hour these men made me paranoid. I started plotting my exit from the bus. I would grab my stuff an immediately walk fast to the border.  The dirty old man understood that I would not accept his creepiness any more and so after 3 hours of torture he left me alone.

It was light out now and I starting recognizing the scenery which meant less than 2 hours until my destination: Argentina. The bus later entered the Bolivian border town of Villazon and I quickly grabbed my bag from underneath the bus and walked briskly to the border. I was not prepared for such cold temperatures. I don’t think anyone can really be.

As my hands and feet grew numb I reached the border. I entered the long line sandwiched between Bolivians and Peruvians with their applications to immigrate to Argentina. I put my bag down and closely watched it as I approached a border official to make certain I was waiting in the correct line. He said yes and I got back into line. I waited a long time for each person to be processed since the paperwork to move to a new country is long as it should be. When it was my turn the angry blond hair Argentine border official pointed the other way and said,

“You need to get an exit stamp from Bolivia first”

I felt morally defeated as I took a step backwards to wait in another line for the exit stamp. Once with my exit stamp I passed the curious Bolivians and Peruvians to the front of the line for my entry stamp into Argentina.

The border official was referring to everyone behind me as he yelled, talking down to them in an an attitude only meant for children.

I handed my passport through a window and was given a form to fill out. Writing with a pen when my hands are numb may be one of the more difficult accomplishments in my life that I have completed. The officials closed the window for the next 10 minutes as I imagine they took a much needed break to complain about their horrendous jobs. The men working here in the poor, cold, and small town of La Quiaca are in the military and for some reason were stationed here out of all places in Argentina. That assignment could make even the most positive person hate life.

Once they returned I answered a few basic questions and was led to a security checkpoint where another guard opened my bag to check for contraband. Minutes later I crossed the border from Bolivia into Argentina and experienced one of the most relieved moments in a long time.