“Please can you at least give me something? Look at me. I can’t even afford shoelaces. They shut down the tours and now I have no way of making money. I have no family or friends. Nothing.”

That’s what Sebastian (cell phone number: 2324002), a prisoner from Holland in the world famous San Pedro prison in Bolivia

said to me as I waited by the bars for a prison guard to call my name so I could exit the prison.

The San Pedro prison in Bolivia is a world famous prison renowned for being a society within itself. Just like my visit to an Ecuadorian female prison

, inmates at San Pedro have jobs inside the community, pay or rent their accommodation, and often live with their families. Way, way different from being detained in London

The book Marching Powder made this place even more well known to tourists as it best describes the experiences of the British inmate who became known for offering prison tours to tourists. The book is even being made into a movie

as I write this. The only thing is tours have been suspended indefinitely as newspapers

videos have spread the word making it more difficult for Bolivian authorities to ignore whats happening.

When I visited in July 2009 the tours had stopped and tourist staff and travelers confidently told me I will  not get in.  I took a taxi to the plaza to see for myself. I circled in 5 or so times hoping to make eye contact. I heard people sometimes wait in the plaza to help people like myself get inside. No such luck.

A few days later I tried again because it was visiting day. I took a taxi and was dropped off at the back of the plaza. I waited a while.

“Your shoes are dirty. Let me shine them.”

They actually were dirty and because in all of my time in Latin America I had never gotten my shoes shined I agreed. The kid, around my age, was outgoing asking me questions. At the end I asked him if he knew about how I could get inside.

I did that and got in line, sandwiched between men visiting their friends and family. At the last minute I bought a surgical mask when I found out it was needed to get in. Bolivians are paranoid about the swine flu. Instead of surgical masks people should be buying hand sanitizer because you never find soap or toilet paper in a public bathroom. That would help a lot more.

If I remember correctly, there were 3 checkpoints. At all 3 of them I stood there stiffly, so nervous to enter the prison because I knew I would likely get turned away, embarrassed in front of everyone. The first checkpoint was a pat down. The second to log my details. I handed over my passport and hand wrote my information into a check-in book. My name, passport, number, who I was visiting, etc. I put down “Jose P.” as my friend?

“What is Jose’s last name?

“I’m not sure, he is a friend of my friend,” I responded.

I was done for, I thought. But when the guard asked me where I live he recognized the name of my hostel. He smiled and told me he had worked near there for a while and set go ahead, with a smirk.

After going through a metal detector I was stamped a few times and finally entered the prison.

Wow. I stood there shaking, but rather calm if that is even possible. A few dirty looking prisoners asked me who I was looking for.

“Somebody that speaks English”

One prisoner ran off and a few more continued to barrage me with questions, most ending with give me money or buy this craft I am selling. Soon enough a middle aged man introduced himself as “Barba”, which is his nickname meaning “beard”. He was actually Bolivian and barely spoke English. I was glad enough to have someone willing to show me around so I agreed.  The Bolivian people speak the most clear Spanish of any Latin country I have visited so I felt confident I would understand most of what my new guide wanted to tell me about.

I will skip to the most interesting person I met during my three hours inside prison. My guide Manuel took me to meet a political prisoner under the guise that I was a journalist wanting to write about his story. Manuel told me that otherwise he might not want to meet me. So I played my part and met Leopoldo Fernandez, a candidate for vice-president for one of the opposition parties, and the former prefect (governor) of  the Pando Department. At the time I had no idea who this man was and doubted his background as a politician. Rather,  I thought he must be a loony with some crazy political ideas.

Low and behold this man has been inside the prison for more than a year without charges filed against him.  Leopoldo was a well spoken and passionate as he explained that he was being held in prison for speaking out against the current government. He handed me a pamphlet of 20 some pages and continued to tell me about the erroneous ways of the current government led by Evo Morales. While I did not follow much of his rant I did notice that he was especially passionate about his beliefs using lots of hand gestures and I could see that he was frustrated with his imprisonment. At the time I could not tell whether he really is being wrongly imprisoned or just delusional.

being charged with the crimes of terrorism, murder, homicide, conspiracy and serious injury

Leopoldo Fernández, the opposition candidate for vice president and prefect of the Pando province, is in jail stemming from another violent confrontation between Morales’s supporters and his political foes. Weeks before the incident, Quintana condemned Fernández’s advocacy for autonomy for Pando (which was the object of an upcoming referendum). Appearing alongside Morales supporters who were involved in the subsequent violence, Quintana declared, “We will bury [Fernández] in the deepest place on Earth. . . . [Fernández], may you rest in peace and rest with the worms.” Two weeks later, on September 11, nine pro-Morales protestors and one opposition supporter were killed in a violent clash in Pando. Morales immediately ordered that Fernández be arrested and brought to La Paz–even before any charges were filed–despite the prefect’s immunity and in violation of the law requiring a local investigation.

Here I thought this guy was likely a conspiracy theorist and then I learned he is legitimate.  Since meeting him in July he has gone on to lose against Morales in the election. He cast his vote from jail too. Can you imagine McCain in America with a say Palin his vice presidential candidate running for election from jail. You can read more about the situation and his role in this CNN article. 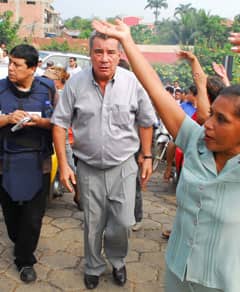 With that more interesting anecdote out of the way I will continue back to where I left off having just met Manuel, my guide. He explained the basics of the prison.

The San Pedro Prison is governed completely by the inmates; guards simply ensure that no prisoners leave the facility. The relative order is the result of inmates ability to operate businesses and own their own cells, which provide the resources necessary to invest in capital for protection and day-to-day living. The inmates are left pretty much to fend for themselves. The prison officials only tasks are to provide a gruel-like meal daily that Manuel told me was actually edible, take a count of the inmates in the morning, and then not let any inmates leave the prison. (Although for a bribe prisoners can take ‘day trips’.) Guards do not secure property rights or enforce contracts; the inmates develop mechanisms to accomplish this.

Manuel and I soon sat down at one of the inmate run restaurants for lunch. Manuel ordered a full plate of barbecue meat for the both of us. I was pleasantly surprised to pay just under US$6 for this. In the middle of the meal an acquaintance of Manuel asked if he wanted a “papa” (potato) and Manuel explained this was code for cocaine. I told Manuel I was not interested in doing any so Manuel paid the man for some just for him and stuffed the bag into his pocket. According to stories from other tourists over the years the most famous thing about the prison is that the prisoners the world´s purest and most potent cocaine.

After lunch we walked through the various neighborhoods of the prison. Each sector annually elects a delegate (leader) and a financial secretary. The prisoners must pay a sort of condo fee to live in  a sector and of course rent or buy their own place to live.

At one point Manuel took me to one of the prison’s few churches. He introduced me to the pastor and then took me to the window where we climbed onto the roof to drink a cup of soda and talk some more.  From this point of view I could see into much of the prison and even some of the “houses”

Later on we continued our walk through dirty alleys, passing by games of soccer. I did get to see the pool described in the Marching Powder book. According to the book sex offenders and other outcasts were dragged into the pool and beaten to death. I asked Manuel about this and he neither confirmed or denied it. But he did pull out a shank and told me how he killed a man with it a few years back in self defense. That made me feel uneasy.

There is a lot more of interest about the prison but to be honest it has been written about to death in many other blogs and publications. On my way out of prison we stopped at the bathroom where I discreetly paid him around US$15 worth in Bolivianos for his tour. I found this much more interesting than visiting a cocaine bar in La Paz

, or my salt flats tour

And as proof I offer you my first prison tattoo.

And it was not until the end when I stood by the gates to exit the prison that I met Sebastian.

“Please can you at least give me something? Look at me. I can’t even afford shoelaces. They shut down the tours and now I have no way of making money. I have no family or friends. Nothing.”

He asked me to spread the word about the tours by having me post his cell phone number on my blog so that tourists could set up a tour ahead of time. You can call Sebastian on his personal cell phone inside the prison at 2324002.

I have no doubt that at some point in the near future tours will once again pick up. Maybe when Brad Pitt’s movie is released?