You are here: Home / All Countries / The Sold Out Ferry To Buenos Aires

I really wanted to visit another city in Uruguay, Punta del Este. Alex and I split and I took a bus a few hours away. before leaving I lent Alex even more $$$. That became a common theme while traveling with him. His ATM card was either lost like in Cordoba or not working like in Uruguay. I gave him some more cash before leaving so he could make it back to Buenos Aires. He always paid me back without me having to ask.

On my way to Punta I left the bus like all other passengers. I walked around pretty lost for a good 30 minutes until I made my way back to the bus station to ask directions to the hostel. The lady helping me became pretty confused with the street names I was telling her and so when I asked where the center of Punta del Este is she answered, “In Punta Del Este, about 30 minutes further on the highway!”

Another bus from the same company I used stopped to drop off another bus load of passengers. He let  me on after I showed him my ticket stub and laughed a little.

Punta del Este is known worldwide as a scenic resort area with miles of beautiful beaches, luxury hotels and restaurants, glittery nightlife and an upscale summer population. For decades Punta del Este was an exclusive resort for wealthy South Americans. But otherwise, it’s also famous for the giant hand on the beach.

Within minutes of being in Punta I accomplished my goal of seeing the giant hand on the beach.

The beach, “La playa de los Dedos” (The finger beach”), which is near the main street in Punta del Este, close to a surf spot, and it has a giant hand emerging from the sand as you can see.

Punta became pretty disappointing. It was off-season for one and the town was deserted. The weather turned foggy with rain and I had nothing to do.

I walked around a little and saw nothing of interest. The choice was made. I left Punta Del Este an hour later for my last stop in Uruguay; Colonia. But to do that I had to take a bus back to Montevideo and from there a bus to Colonia.

Colonia was built in Portuguese style of houses and cobblestoned streets, the historic portion of Colonia is reminiscent of old Lisbon. The historic quarter, Barrío Historico, on a small peninsula jutting out into the river, was named a UNESCO

But more or less, it’s like any other nice colonial town in South America. Beautiful but rather ordinary.

On a side not, they have hot water (“Hay Agua Caliente”)! I spent the night in Colonia, fortunately in a hostel with hot water. Not the one in the picture though.

So Colonia was alright. It’s one of those places that I could really enjoy taking a date to. A bottle of wine by the water.

Speaking of water; after half a day of wandering in Colonia the following day I walked down to the pier to buy my ticket home to Buenos Aires.

Tough luck for me. All 2000+ tickets were sold out on the buquebus ferry I arrived on. I took a number on the waiting list and hoped for the best.I remember thinking it wouldn’t be to bad if I had to miss a day of classes at university.

Just as I had thought, the ferry had no open spots after an hour of waiting. As I walked away from the pier I noticed another entrance to another ferry. I remembered reading about this other service but the folk at the hostel had mentioned it was necessary to buy tickets weeks in advance.

I chose to try my luck anyways…and boy was I fortunate. 20 minutes later I was on the ferry going back to Buenos Aires, just in time for a big steak dinner, later in the evening. 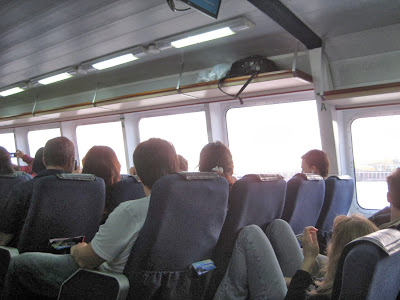