You are here: Home / Europe / Italy / I thought I’d Be in A Wheelchair By The Time I’d Visit Venice Italy 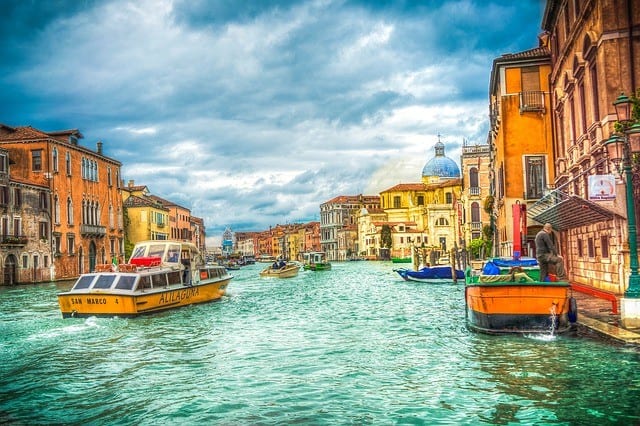 I never planned on traveling to Italy. I never fantasized about getting lost in Venice, Italy

and it’s never ending canals or eating pasta in Rome. But travel can be mysterious and after a week in Ukraine I arrived in Venice, Italy. Most flights out of Ukraine to someplace mainstream cost a fortune but to Italy it was somewhat reasonable. I was so close to so many interesting European countries that I just booked my flight and went late Sunday afternoon.

Travel in mainstream Europe is pretty effortless. You don’t need to watch your back for criminals, many people speak English, public transportation to landmarks are inexpensive and straightforward or if you want something private, you could rent your own vehicle with car hire insurance in case something happens. With that said it’s still impossible not to get lost in Venice, Italy. After a plane, bus, and boat ride I arrived on the dock near my hostel in the middle of Venice near midnight. The streets were dead quiet.  I had scratched a few nonsensical directions on the back of a receipt to get the address but it all relied on navigating around a particular church. But there are dozens of churches in Venice. I was lost. This is when I feel envious of everyone with an iPhone and its handy GPS system.

Well I did find my hostel and felt daring enough to find a late night dinner just an hour before the hostel’s curfew. I didn’t find any food but I did get lost, again. It’s hard without a map. With five minutes before 1AM I lucked out and stumbled down an alley to the hostel and went to bed with great relief.

The curfew is something new. It’s been somewhat the norm in European hostels which I have since found far inferior than even hostels in Bolivia. That’s saying something. Besides a curfew and a lockout from 10AM -1:30 the hostel is built around deadbeat backpackers who would rather slave away as unpaid workers. The Israeli worker who checked me in was unpleasant. For instance, she refused to check in a girl who arrived to the hostel a little past 1AM and so that girl slept in the lobby that night. It’s an official rule of the hostel, but still, come on! Fast forward to the morning I checkout. One of the friendlier hostel workers suggests it should be okay to store my belongings as long as I am discreet about it. When I return to collect it at 1:30 I can’t get in the front door without ringing the hostel doorbell.  So I stand outside for a minute trying to figure out what to do but then they buzz me in without me doing anything. The owner is waiting for me at the front door and immediately asks me what I want. I tell him the truth and he responds which an enthusiastic lesson about what checkout time means. I apologize but he questions me more asking why I thought I could store my bag for an extra three hours. He calls all of his staff members to ask if any of them told me I could. I apologized again, grabbed my belongings, and left with a bad taste for Venice.

Nevertheless, I did find Venice, Italy to be a stunning city well worth the visit even if I did not get the chance to do a Venice Gondola Ride.

In order to navigate the canals the city employs a route of public ferries which work really well. But I noticed they very rarely ever check to see if you have a ticket. there is no barrier to entering or leaving the boat and nobody on board to collect any tickets.

I left for Rome after a few days in Venice. My travel has picked up speed and its easy to think that I am spending too much time in airports and train stations. Maybe so but the benefit of working while traveling is that I pull out my laptop any instant of free time and find myself productive, fulfilling hundred some dollar orders on a train or waiting for a plane. I really don’t mind waiting anymore, especially when there is internet.